Sainsbury’s, the Official Partner of the London 2012 Paralympic Games, has today premiered a new campaign created with its Paralympic Games Ambassador, David Beckham.  By partnering with David Beckham, Sainsbury’s hopes to inspire children of all ages and abilities to lead healthier and more active lifestyles. 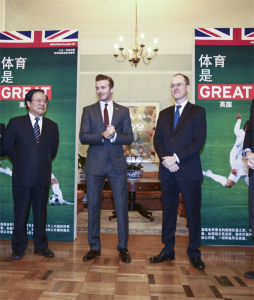 The film focuses on Dave Clarke, the ParalympicsGB Beijing 5 a sideFootball Captain, as he coaches the blindfolded Beckham through a set of drills. The campaign aims to drive further awareness of the Sainsbury’s Million Kids Challenge, while highlighting the level of skill and commitment required to participate in Paralympic sport.

The Sainsbury’s Million Kids Challenge was launched in April this year and through the distribution of free Paralympic sports equipment to schools, kids of all ages and abilities are being given the opportunity to have a go at  Paralympic 5 a side Football, Sitting Volleyball and Goalball.  The Challenge has already been taken up by over 6,000 schools with an estimated 2m kids signed up to participate, and it is hoped that this short film will encourage even more schools to sign up. Schools can also win rewards and benefits such as being involved in the Paralympic Torch Relay.

Justin King, Sainsbury’s chief executive, said: “We are delighted that David Beckham is supporting the Sainsbury’s Million Kids Challenge and our Paralympic sponsorship more widely. With David’s involvement we aim to encourage even more schools and their pupils to take part in Paralympic Sport, enabling us to further raise the profile of the Paralympic Games in the run up to London 2012.”

David Beckham, said: “It has been a fantastic experience training with the ParalympicsGB  5 a side Football squad as I have never experienced or participated in blind football before. They are a real testament to the quality of our Paralympic athletes. The character and determination they show by doing this every single day, makes me proud to be British.”

Dave Clarke,  ParalympicsGB Beijing 5 a side Football Captain Said: “Spending a day training with a world football icon like David Beckham was a great experience we will never forget. This opportunity allowed our squad to showcase the skills and levels of concentration needed to participate in blind football at an elite level. With David’s support and through the Sainsbury’s Million Kids Challenge, we are encouraging much of the UK to experience Paralympic Sports for the first time.”

Schools can sign up to join the Sainsbury’s  Million Kids Challenge, designed to allow kids of all ages and abilities to try out a London 2012 Paralympic sport ahead of the Games in 2012 by visiting www.sainsburys.co.uk/1millionkids/.

The film was created by AMV BBDO, the UK’s largest advertising agency.