Last night David Beckham celebrated a Hollywood fairytale ending by winning the MLS Cup Final for a second time as his team the LA Galaxy beat Houston Dynamo at the Home Depot Centre thanks to two penalties from Landon Donovan and Robbie Keane.

And now, just as he left Manchester United as a Premier League Champion, and departing Real Madrid after topping La Liga, so Beckham now bids farewell to the USA as a winner.

Speaking after lifting the MLS Cup, David Beckham reflected on the fairytale endings he’s enjoyed at his previous clubs.

“I still love it like I did when I won my first.” 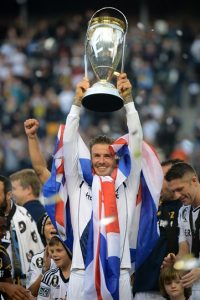 David Beckham is managed by Simon Fuller at XIX
Entertainment